Sustainability? Sushi Knows It All

Are you a sushi lover? Many of us consider sushi as Japan’s most famous delicacy, and it is true. However, sushi transformed into the modern day form, nigiri and maki, not too long ago. Think of it this way: the freshness of the seafood determines the quality of the sushi. It only takes a bite to know if the fish is fresh or not. How were fish kept fresh in the times before refrigerators, and why was it important to eat fish raw? Surprisingly, the history behind Japan’s fish eating culture leads to the basic concept of sustainability, called “mottainai.”

Modern day sushi was invented in early 19th century in old Tokyo, called Edo. By this time, people in the city had the privilege to enjoy a variety of food. Even in the old days, food trends began in food stands just like food trucks for modern days. This is when sushi transformed into the nigiri form. Grab, eat, and go; it was a perfect easy meal for busy Edo people. Nigiri consists of 3 parts: fish topping, wasabi, and vinegar rice. Flavor and texture blend and meld together, creating delectable tastes. Now, we think those 3 are an inseparable trio, but each ingredient has meaning and there is history and reasoning behind it. 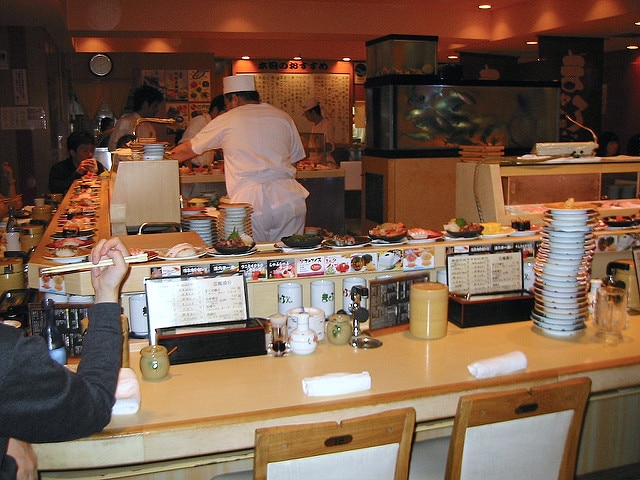 Conveyor belt sushi has the same concept. Sit, eat, and go. The different colors of plates represent the price of sushi. photo by

The origin of sushi goes back to the 8th century. Fish was considered a delicacy in many places and was also considered as a great tribute to rulers. Preservation methods developed over time in order to transport fish further. Sushi rice was originally used as a preservation method for fish by fermenting the fish with rice for days to months. Rice triggers lactic fermentation which minimizes the cultivation of bacteria and gives the fish a sour flavor. Over time, the fermentation period was shortened and vinegar was added to sanitize the fish and to recreate the signature sour flavor. Wasabi was added for the same purpose and to erase the fishy scent. This is the sushi that we all know and love today. 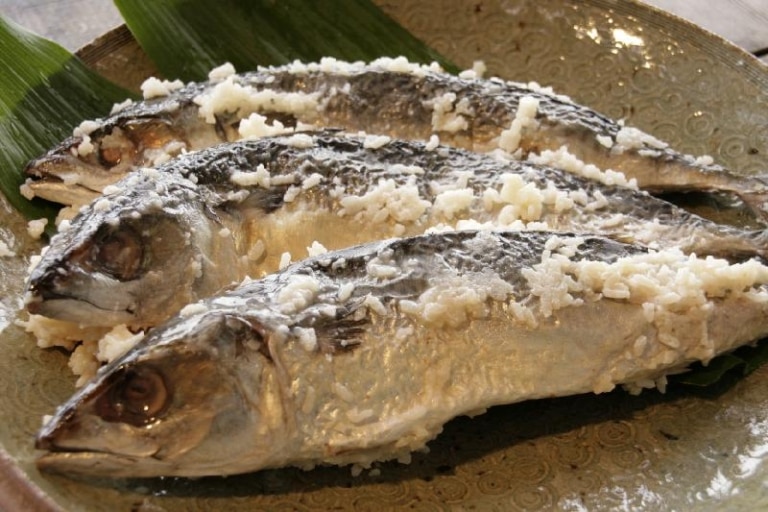 In traditional Japanese cooking, seasonality is one of the most important elements. From the old days, fishermen caught according to the season and only caught what they needed. The variety of preservation methods developed over time to keep the fish fresh longer. The wisdom of the fisherman, which was passed down from one generation to the next, also taught the spirit of honoring and appreciating the gift of nature. Simply, there was no waste.

This term permeated through Japanese society after the 19th century when populations in urban areas expanded and the supply of resources simply could not meet the expanding demands. “Use what we have wisely, then there will be no waste” was the spirit behind mottainai.

The meaning of mottainai and the concept of sustainability share a key message. Natural resources are limited. We need to use them wisely by managing our resources, setting guidelines, and simply being alert and thinking before using them.

In the 21st century, it seems that this beautiful spirit is fading in our society. Most fish are available year round with the latest in freezing and transporting technology. The resource management and fishery policies and regulations are outdated and have not been renewed for decades They simply do not meet the needs of a high consumption society.

We, the Japanese, have the spirit of mottainai. Everyone learns to eat to the last grain of rice and leave nothing on the plate at home and school. Only take what is really needed and leave no waste. We naturally learn the concept of sustainability and personal responsibility. This is why Seafood Legacy believes that seafood sustainability is possible in Japan. As 2020 approaches, we need to activate and apply our mottainai spirit and take the lead on global seafood sustainability.